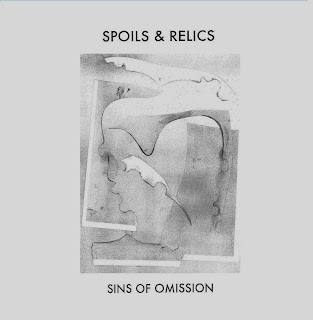 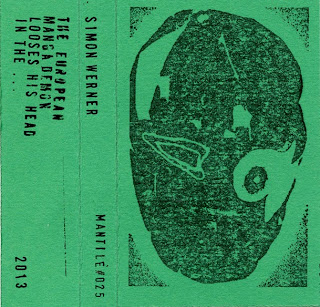 The European Manga Demon Looses His Head In The Face Of Flowers And Other Suspicious Anthropomorphism is a 3 track polemic - Tracks A1 and B look towards the thematic and visual complexities that manga as art form has to offer, at the same time they condemn the desexualised, banal morality of disney & co. productions. Track A2 offers reflections on image blogs.

Labels: mantile, Simon Werner, The European Manga Demon Looses His Head In The Face Of Flowers And Other Suspicious Anthropomorphism 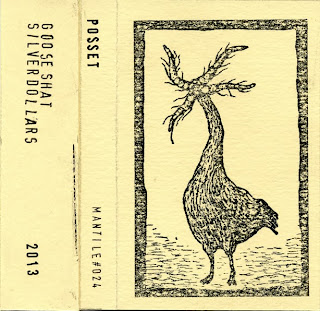 As for the Goose Shat Silver Dollars, well I was in rural Lincoln visiting my brother who lives down that way.  We were having a drink in some country pub (village green, duck pond etc) and all these geese were honking round shitting like mad.  I mean really going for it.  There were gleaming piles of shit everywhere.  And the thing is, goose shit appears to be silver when it first comes out.  Stubby silver cylinders like a roll of silver dollars.


Cassettes: £5 each
Downloads: £donation
To Order Email: mantilerecords@gmail.com (please email to check availability before making payment)
Payment via paypal to mantilerecords@gmail.com or cheque. All payments in British pounds (GBP £).
Postage Costs: UK: £1.50 / Europe: £2.00 / Everywhere Else: £2.50 + 50p per additional
Posted by MANTILE at 06:30

Available for pre-order from: harbingersound(AT)lineone(DOT)net

Spoils & Relics are playing the following dates in October and November 2013:

*10/11 - Brighton, Colour Out Of Space Festival (collaboration with Karen Constance)
http://www.colouroutofspace.org/
Posted by MANTILE at 08:36

Fossils Material Distributed to the UK and Europe.

Due to the postage cost increases in North America Mantile will now be distributing selected Fossils releases for the UK and Europe. 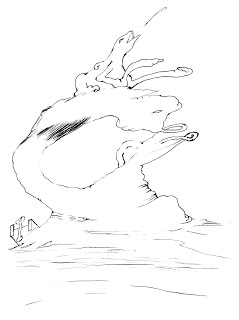 "Fossils were Daniel Farr, Graham Lambkin and David Payne. 2012 duo recordings of Farr and Payne were transferred to Lambkin for special treatment. Lambkin's touch is understated yet elevates Fossils to new heights.
Side A 'Korjev' brings you to the playground, combining electronic and organic impressions.
Side B 'Wet Industry' is a bus ride to the rodeo, vibrating subtle itch on the spine."
Check out sights and sounds http://youtu.be/re91-DE90kk
Lathes cut by Graham Baldwin at 2208 http://2208records.blogspot.ca/
Artwork by Graham Lambkin
50 numbered copies 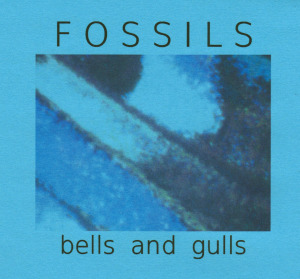 "Since 2004, the FOSSILS collective, working out of Hamilton, Ontario, have been issuing a constant flow of exciting, micro-label editions of fascinating, edgy, complex, and often witty experimental music. Can’t really think of a similar outfit—the approach is not unlike The LA Free Music Society, and they have a DIY cut-up/xerox aesthetic to the releases that always gives the music a warm human feel (like KSE, I’m thinking they are animated by the true original spirit of punk, when punk was a spirit and not a commodity and a set of images), and the music itself is always a surprise…you cannot put a label like “drone” or “harsh noise” or “free improv” on this body of work. I’ve got about a dozen Fossils releases, and each is REALLY different. They can be brutal, they can be tender and elegant, they can be absurdist, they can be trippy, but usually they will be delivering a unique blend of off-kilter sound experiments, always fresh and unexpected. They also have the “everything but the kitchen sink” approach to instrumentation that reminds one of the early AACM/Art Ensemble of Chicago and the above-mentioned LAFMS. So if those names interest you (one is tempted to add Jandek, AMM, and Half Japanese too), you should be on the Middle James mailing list (go to Yahoo Groups and look up Middle James Co. and subscribe) and you will want this exciting and decidedly different new FOSSILS creation from KSE: BELLS AND GULLS.

This new release, recorded especially for KSE, features core Fossils members Daniel Farr on piano and David Payne on accordion, and the first two tracks feature this duo material…although you should think of these instruments as  ”sound sources” as the material is treated heavily. The piano is clearly a piano in some parts (reminiscent of the “broken piano” found on Coum Transmissions “Sugarmorphoses” LP), though the playing is of a wobbly nature that reminds me of a gyroscope falling off its axis (and that’s before it’s slowed down and stretched like elastic), and the accordion is used to create various chunky, streaky layers. Thus, the overall effect is one of cold candle-lit bubbling, churning other-worldly experimental library music filtered through Two Virgins. It’s atmospheric and as you listen it leaves melted residue on your mind. Also, the hand of the artist is clear in the edits/overlays which are not intended to be un-noticed and seamless, so it’s almost like an action-painting in sound.


The remaining 7 tracks consist of solo pieces from Farr (tracks 3-5) and Payne (tracks 6-9), which use recordings from the same source-material sessions, but go much further out. I have images of AMM rehearsing in a dank chamber of Boris Karloff’s dungeon, full of Jess Franco-esque zooms and garish-colored lighting, and with someone tripping while messing with the sound source. You can conjur your own picture, but this is the perfect music for the freezing wet 5 a.m. winter atmosphere in which I’m typing this.
And the exciting news is that the next Fossils release will be nothing at all like this. These guys are doing important work. They are unconcerned with image and hipness and being part of some clique, as so many “experimental” musicians in the so-called noise world are. This is original creation of the purist sort–in the great North American tradition spanning from Harry Partch to Jandek and beyond. Fossils and Middle James Co. are creating one of the most original bodies of work being done today. People will look back on this and pretend to have been champions of it while they were actually over-praising the darlings of the drone/ambient/noise world instead. Get on the Fossils Train To Surreal Lalaland NOW with BELLS AND GULLS. KSE is honored to feature Messrs. Payne and Farr’s work and to welcome them to the KSE family. Fossils and Middle James are the kind of groups/arts collectives that I look up to and respect…and most of all, ENJOY as they document the pure joy of creation, with the blinders taken off, the training wheels removed, and the fences taken down. It’s a wild ride…"

Limited 7" record on Harbinger Sound. Only available from The Chameleon venue in Nottngham, UK. The price is TBC at the point of purchase - no doubt dependent upon the proprietors luck down the bookies that morning. Good luck. 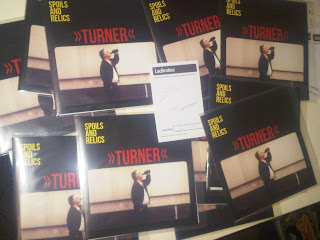 If you can't make it to Nottingham then be resourceful.

There will be a full-length album from Spoils & Relics on Harbinger Sound over the summer months too.
Posted by MANTILE at 06:56 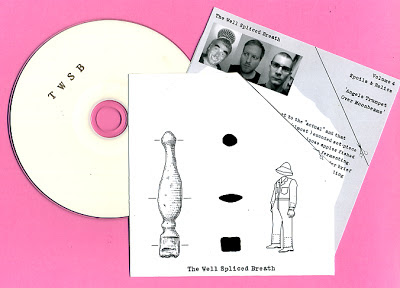 "Volume 4 in 'The Well Spliced Breath' series started for sound-tape collage, text-sound, radiophonic, horspiel-type muck. Spoils & Relics are one of the best UK acts doing this kind of thing just now, tuned in collage.  Come take in their strange narrative."

We've read that you could actually get to the "actual" and that behind the Real Utopian Gateway lays an (almost) encoded set-piece of information. Within it it is said that those loose apples fished from the rabbit hole will emit odd electricities when fermenting. Stick your head over the barrel and inhale before you swig for brief baseless effect. Now without climbing the walls, walk the ceiling from the otherside and take the stairs to the bottom.
Angels trumpet over moonbeams.