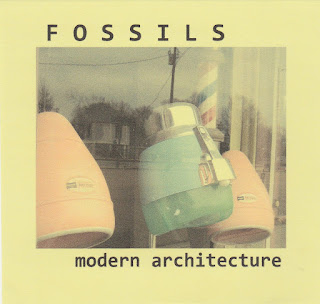 "From our perspective, the FOSSILS collective is an ESSENTIAL part of the new music scene, and they have been for many years. With music (sound sculpture) rooted in such outfits as AMM, The Nihilist Spasm Band, and the LAFMS, they have also through their MIDDLE JAMES CO. organization kept the lo-fi DIY flag flying. So many labels today are pursuing “art editions” which are beautiful and do sell for their self-conscious “collectability”, but are a bit too precious and pretty for our taste. I like packaging where you can’t tell if there is a printing error or not—-packaging where you could sit a coffee cup on it and the coffee-stain ring would become part of the artwork. KSE applauds their keeping the xerox/DIY/punk-industrial/anti-pretty aesthetic alive and kicking. As DIY micro-labels continue to lose sales to the pretty and the pretentious, this attitude is needed now more than ever.

As for the music, every FOSSILS album is different, but many things stay the same: the playful improvisation, the multi-textured sound sculpture, the speaker-splitting jaggedness, the humor, the “action painting in sound” aesthetic. This one (which features saxophone, percussion, cello or violin, guitar, and electronics) begins quite playfully (almost a twist of Half Japanese, though with saxophone) and then  heads for a long walk along the Canadian free-improv prairie, adapting to the weather and even morphing into almost-antisong song in a few places. It takes you into its own world for the length of an album, and then, as when leaving the darkness of a fun-house and emerging into the mundane light of day, the CD is over, you’ve crashed. But the trip was awesome!!!" - KSE Editions 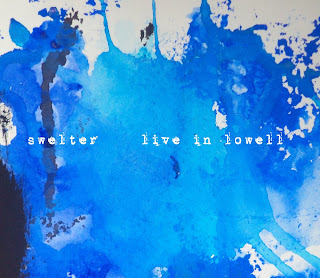 "Swelter indeed. A hot slab of collaborative psychic summer energy burn from two of the finest experimentalists in North America – Howard Stelzer and David Payne (Fossils). Two-man howl of shredded tapes and analog junk recorded live in August 2014 in Lowell, MA, the music on this disc is all about texture, sizzle and feel. It would be folly (and beside the point) to pick out individual contributions, as both voices blend superbly into a single slab of sound. When the music is this good, it’s far better to sit back, let the sound wash over you and experience the ultimate sonic catharsis. A dense and even psychedelic mind scrubbing that offers multiple epiphanies and aesthetic rewards. New details emerge with each listen, but it’s the overall immersive effect that will pull you back in time and time again. Like entering a new world where time and space have collapsed and all that remains is the beautiful abyss." TD RECORDS 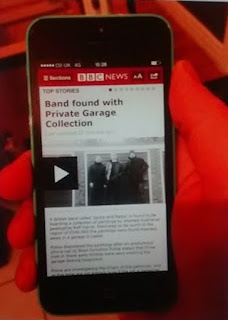 "It’s curious to note how meticulous in their output Spoils & Relics have become in recent years. Following the first couple years of frantic activity, the trio has become as of late. 2014 saw the release of the Embed And Then Forget cd on Porta, while 2015 finds two scant outings - a track on the Found Secret comp. and this, a relatively brief cassette from Rich Hopkin’s well-curated Feral Tapes. Perhaps the extended text on the cover of the tape discussing the sticky twists and turn of the j card artwork should serve as some indication of the band’s thoroughness. A blunt noise, silence and then faint crackle announce this, the new Spoils & Relics release. Next we we hear more clanging and perhaps the sound of a contact mic being dragged against a surface, maybe amplified breath? A high frequency, then perhaps a clipped vocal bleep. There’s always a relational agency to the interplay of sounds on Spoils & Relics release. Some shuffling is contrast with a sound rising in pitch and faint sonics which are perhaps musical in nature. There’s more mystery at hand than on, say, the Martin & Mobin discussed above. There’s humor, much like the Posset, but it’s always icy and bleak, sometimes brutal. Every sounds seems to have a significance, but one also wonders why even bother. There’s a caustic void which is almost Beckett-esque in its grotesque pallor. More silence, very faint talking, maybe laughing and maybe dial tone. Then, a throat sound, no voices. Everything remains very low-end, aside from the intermittent outburst and drilling hum. Then, a click. Silence, the tape turns over. More shaking, a hum and more overt electronics open side b. I think I can clearly make out radio, maybe a horn of some sort. A tape is clearly being manually sped up and slowed down. There’s the echo of footprints in water and again, more aggressive electronics. Obsolete malfunctions. It’s terrifying while never resorting to being cheap. The use of space in Spoils & Relics is perhaps their most sophisticated technique. The silence flows as an inky void into the sounds themselves, leaving everything vacant, whether its an unprocessed scream which abruptly arises in the mix ora mid-range bluster which could just as either be an explosion or a recording of a door driven into the red. And that’s where the tape ends. With a question."  Allen Mozek
Posted by MANTILE at 05:00